Hey, folks! It’s that time of the year again when the dedicated professional in charge of this studio returns to get things rolling with our latest project. Well, technically not our latest project. That’s going to be discussed in another blog post in what is likely to be a series of posts over the next week. Enough of the puzzle pieces are in place that I feel comfortable about showing some of the amazing things that IDHAS has in store over the next several months. We’re going to start with our biggest presentation first, the one I know most of you have been waiting to hear about! The special project is…

Possessing the crystal that almost killed the lives of the brave crew of the KSS Nimross, Special Investigations and Tactics officer Natalie Puccile is on the run from those she once served alongside. With nothing but the scraps of information from her previous investigation, Natalie is forced to scour the galaxy for hints of the truth and support from those who trust in her. But with threats from all sides closing in, will her skills as an investigator and the faith of those loyal few be enough to prevent the truth and safety of the galaxy from disappearing into nothingness?

That’s right! It’s Rising Angels: Fates. Not Rising Angels: Fayes, like I keep misspelling. I was pondering how I should make the first public announcement. In the end, I decided to go with some of the biggest questions that have hovered over development and discuss them first. We’ll go more into the cast and plot in our next Fates post.

I’m probably forgetting a lot of things, but this is already a long post. Our next discussion is supposed to be about Rising Angels: Hope, the Red Rose remake, but I think I might buck the schedule a bit and write some tidbits on the plot and cast. I’m very, very excited about some of the awesome storylines coming up and it has been hard lately not to go into super chatty mode. Anyway, I hope you are all excited. All updates will also be appearing on the Rising Angels: Fates page you can access at the top of the screen. It’s barren right now, but it will be growing as the week goes on. Spread the word, Rising Angels is back. 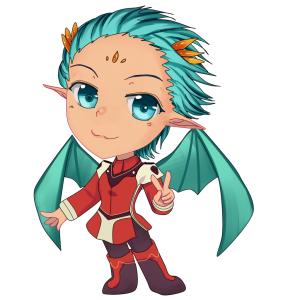 (Special thanks to Jason for chibi Zuri!)

Our video of the post is one that’s been bugging me. I’m particularly fond of it while I write Nat and Zuri scenes.