Hello, folks! It’s that time again! In Rising Angels: Fates, Natalie is up against several opposing factions who have their own agenda in the story. Last time we talked about Alexi, who represented the Raltin Empire faction. Now, the evil bad guys are pretty easy to hate and work against. I mean, they’re evil, right? They eat babies and burn down puppy orphanages. Raltins are like that, you know? However, not all the people who are gunning to bring Natalie down are cut from that simple ideological cloth. Some of them are Katajions as well, just trying to protect their homes from a rampaging intelligence agent gone rogue. 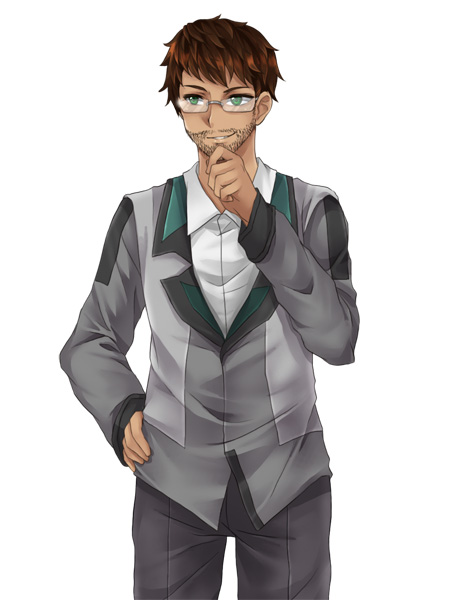 Bio: Anton works as Director Sora Doichu’s assistant, helping her save the universe, but mostly doing her day-to-day paperwork. Originally a political writer, Anton was injured in a car accident and frozen with cryogenics. After being thawed, he caught Sora’s eye for his quick thinking and ingenuity. Sora tends to overwork him with cleaning up her messes, but Anton loves what he does and works hard to keep peace throughout the land. Even when it could put him in danger, Anton goes out of his way to protect as many people as possible.

Chief’s Notes: Anton Rogers… You almost can’t talk about the overarching series without talking a bit about Anton Rogers. While he was not the original protagonist of the series, he has been at the forefront of it since pretty much the original start of the fictional story pieces. Now, it brings me a lot of shame to admit this, but Anton started out as a self-insert character. I was young and still developing as a writer. I thought that it was a cool idea and everyone would love it.

Anton stayed this way for a while, but… I lost control of myself, in a manner of speaking. Over time, he started doing things that I did not approve of. He started saying things and doing things that I stood against, but I could see him doing. It’s interesting to watch how characters grow over time, just like people change and evolve as experience molds them. In the end, I had lost my self-insert and got a very peculiar protagonist.

One of the things we are doing with Anton is changing up his look from our older visual novel, Anton’s Vacation, and going back to his canon look. Darker skin, greener eyes, and, most importantly, a uniform that isn’t from a Japanese high school! Now, Anton has always worn a gray uniform, so that was the one aspect from Anton’s Vacation that had to stay. Unlike Natalie and some of the other Special Investigations and Tactics officers, he blends into the background a lot better.

When facing up against Anton, one of the first things the players are going to notice is that he’s friendly. It’s a bit of an awkward friendliness as he isn’t the most practiced speaker, but he obviously means well. Unlike Alexi, he doesn’t want to wear Natalie’s lower intestines as a necklace. He’ll buy you a cup of coffee and talk about all of the latest games that have come out. If you forget for a moment that he’s working for the group trying to arrest Natalie, he’ll get what he wants quickly and it will be game over. Though he is kind-hearted, Natalie (and you as the player) should always keep the veteran investigator at a distance. You never know what innocent sounding question is going to be for the match point.

On the other side of the coin, Anton is working towards the same goal that Natalie is. He’s a loyal patriot to the government he helped found so many years ago. Even though Natalie turned against the Katajion Directorship to ensure that the artifact would never have a chance of falling into the wrong hands, that doesn’t mean she’s turned away from her oath. Hurting a fellow SITO would be a heavy burden on her, one she doesn’t quite know if she could carry. Fighting against Anton too hard could hinder both of them and allow the Raltins to take the prize.

Besides, Sol and Anton have worked together in the past. They’re friends… right?

Well, that’s all for this update. Those are the two major villains who are going to be your adversaries in Rising Angels: Fates. There are other ones, but you will be facing down those two most of the time.

As we bring this update to a close, I want to thank everyone who has supported us! I know I do this every time, but my gratitude knows no limits. We’re 37% funded so far and I know that we will make it to 100%. Please help continue to spread the word out there! Every little bit helps to make this game a reality! This Sunday we are planning on showing a video of some of the upcoming gameplay, so please stay tuned! Chief out!