So now that I’ve finished that rant, let’s move on to something that is a little more pertinent to the whole Chief being a visual novel developer instead of a ranting emo machine! Today we are going to talk about one of my personal favorite characters and potentially one of yours. Today we are going to talk about someone who is not only a veteran of Katajion’s Dream, but of Anton’s Vacation and Rising Angels! That’s right, she’s someone you might actually know, Trilani Ranger Yoi Mono. For this part, anything in parenthesis is specific to Anton’s Vacation. 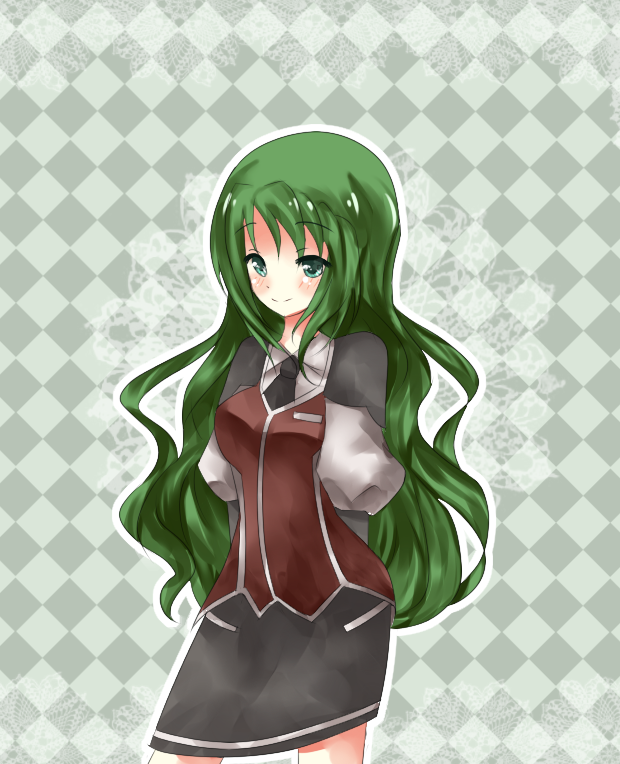 Bio: The daughter of a Katajion Director and granddaughter of the Trilani Rangers’ patriarch, many thought that she would have a life of ease. However, her father was assassinated in office while she was only three. She was then sent to live with her mother as an elven ranger trainee. Many in the community resented Minako Mono’s husband, leading to her exile from the world of Troplain. The council also wished to banish the young Yoi, but the Patriarch refused, saying she had commit no offense and would permit the girl to continue training as a ranger and the eventual heiress of the Trilani Rangers.

Yoi grew up with very few friends, suffering the scorn of being a half-elf in a pure blood society. Nonetheless, she tried her best to make friends, often coming off as hyperactive and talkative to conceal her loneliness. In an effort to help his granddaughter out and get her away from the racism, a deal was brokered between the Katajion Directorship to permit Yoi to attend the Space Academy, making her the first Trilani ranger to also attempt to be a combat pilot.

(After her academy days, Yoi was assigned to a squadron with former friends Lenna Edeck and Sol Hackett. Unbeknownst to them, Yoi was on an assignment for the Trilani Rangers. Her mission was to assassinate Commander Anton Rogers. After her mission failed due to shifting mission objectives, Yoi accepted a mercenary job as Commander Roger’s bodyguard. Yoi served with him during the Chaos at Morterous, aiding Dr. Bruger with her virus attempts and undermining Rogers. During the Signing of the Peace Treaty, Yoi was cohered into turning against Anton and preventing the signing of the treaty after a fellow ranger was taken hostage by former Director Nickasomo Zealeuos. Yoi continues to serve Anton, though many question if she can still be trusted.)

Chief’s notes: Yoi is a reoccurring villain in pretty much everything she’s ever been in, despite her best efforts to be on the side of good and justice. She’s manipulative and crafty, but she gets rerouted easily. When I was first developing her character, I started out with a slightly modified Rikku for FF10. Yoi was a very minor character who was there for an energetic comic relief character for Lenna. That didn’t stick. Yoi was a very dynamic character who kept ending up in places I never intended her to be.

One thing that has always ate at me while writing Yoi is her energetic, bubbly personality. It always seemed to suit her so well, but something just felt wrong. It was like petting a cat the wrong way. It is still fuzzy, but you know your hand was just seconds from being shredded by claws. Her happiness felt legitimate, but at the same time, I could see her using her own nature as a shield from her feelings. Yoi would be sad, hurt, and emotionally ripped apart in a scene, but she’d just keep acting like everything was fine. The more I wrote her, the more it dawned on me that I didn’t understand a thing about the character I had created. It took me several rewrites and books before I finally saw the true Yoi, a mature girl hurt by years of solitude, forced to hide behind a mask so long that she couldn’t figure out which was her true self.

One thing that is rather special about Yoi is that she’s the first character I’ve ever drawn. I used to draw her so much! Since I’ve dropped out of art, she doesn’t get drawn nearly as much. One thing people might notice is the difference in her hair from Rising Angels and Katajion’s Dream to Anton’s Vacation. To me, it seemed fitting as she uncovered more and more of her true self and found her place in the universe. I personally liked the short, spiky style more, but I know a lot of fans loved her long, wavy hair more. Too bad, it is staying short for Rising Angels!

Yoi in Rising Angels is going to be fun. She’s just managed to escape the world where she’s the lowest of scum and finally has a chance to pursue a little fun and adventure. Out of all the cadets, Yoi is the one who actively pursues Faye with a persistent resolve. Yoi sticks with Faye during all of the routes, loyal to her new friend. Watch out, though. Yoi isn’t known for knowing when to give up or keeping in boundaries. Yoi’s route will be unlocked at the end of Lenna’s Act 2 after a tragic event happens in Faye’s life.

I’m going to be offline for a while. I’ve got some more character bios that are setup on an automated system though, so expect to see some more updates this week.

Remember, supporting IDHAS is what all the cool kids do!

Today’s vid of the post is one that is rather special to me right now. I’ve never had quite such a fitting song.