Plot: Despite brilliance and skill, Natalie Puccile, a Special Investigations and Tactics officer with the Katajion Directorship, has spent her career watching over a listening post in the middle of deep space. After the orders that she has always dreamed of finally arrive, she finds herself in charge of a small destroyer and tasked with discovering the fate of a missing research team investigating an ancient civilization. As the universe she knows falls apart around her, it is up to Natalie’s brilliance and the dedication of the crew of the KSS Nimross to avert a galaxy-shattering event that could spell the end of all space travel. With determination in her heart, Natalie rises to the chance to beat back the danger and perhaps find love in the twinkling lights of the distant stars.

Downloads for the Android can be found here.

-Rising Angels: Reborn is a spin-off in the Rising Angels series.
-Four hours of epic adventure and heartwarming romance (yuri only)
-Five endings to this adventure
-Release date of October 31st
-Unique sprites with multiple poses, backgrounds and GUI (none of that 90s Japanese high school stuff this time)
-1366×768 resolution
-Free… not the anime, the amount of money required for purchase

Rated 14+ for language (light, but still…) and violent themes 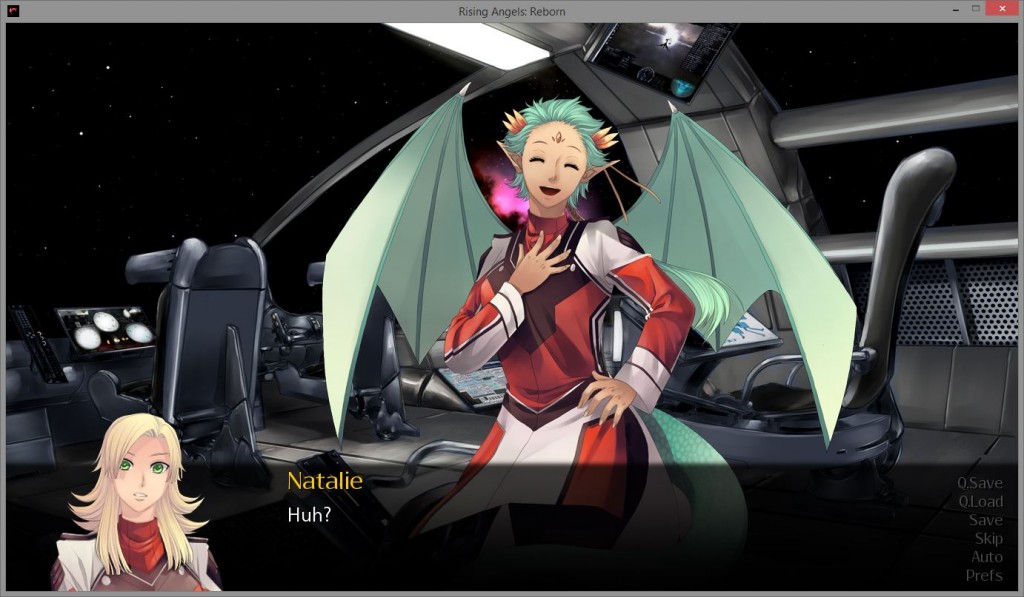 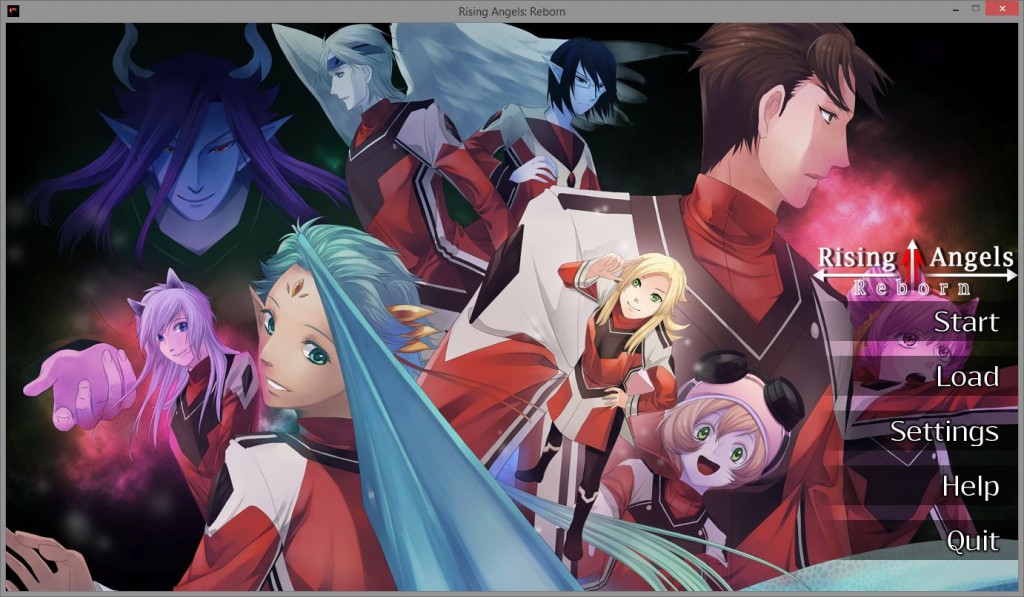 Name: Natalie Puccile
Age: 24
Gender: F
Rank: Major
Bio: The protagonist. A brilliant mind who always excelled at schooling, Natalie won numerous awards growing up for academic excellence. When she graduated, Natalie immediately joined the space force to work as a Special Investigations and Tactics officer. During training, she rapidly overtook her peers. However, few people wanted to associate with her due to her brazen nature and elitism. After a whistleblowing incident, Natalie was assigned to manage an outpost in the middle of nowhere with only a couple of robots. Nevertheless, Natalie worked hard and was finally award a chance to prove herself to command.

Quotes:
“Just because you don’t understand doesn’t mean I don’t.”
“Friends are just the people who will exploit you faster than a stranger.”
“I’m going to protect everyone and be the best!” Name: Zuri
Age: 121
Gender: F
Rank: Lieutenant
Bio: The security officer of the KSS Nimross. In high school, Zuri was a track star, admired galaxy-wide for her speed. When she graduated, she accepted a commission to the academy to become a security officer. Spunky and determined, Zuri’s fearless and optimistic nature serves as a rallying point to those around her. While she questions herself, there is nothing more important to her than striving to be a true warrior and protect her friends.

Quotes:
“We can’t give up yet! A real warrior never quits!”
“There’s nothing a good, hard workout can’t solve.” Name: Sol Hackett
Age: 24
Gender: M
Rank: Major
Bio: A fighter pilot who has spent the last couple years fighting in the war. After losing the love of his life to a non-human, Sol’s bitter hatred for non-humans has only amplified. While fighting in the war, Sol’s constant loss of loved ones and friends has led him to become pessimistic and depressed. Tough on his fellow pilots, Sol knows it is only a matter of time before they leave him as well.

Quotes:
“What’s the point in caring when robots or mutts take it all away from you?”
“I don’t want to talk about it.” Name: Azaia Resoona
Age: 26
Gender: F
Rank: Vice Commander
Bio: The captain of the KSS Nimross, Natalie’s Command ship. Azaia has a no-nonsense attitude towards unprofessional behaviors and constantly trains her troops to be the best they can be. Unlike Natalie, Azaia tries to instill a strong sense of camaraderie and teamwork into her command. Many of her former troops don’t think Azaia has any idea of what fun or rest is anymore.

Quotes:
“We must hang together or else they will hang us together.”
“Sleep? You get your six hours a day. The rest of that is my time.” Name: Kylie Migi
Age: 18
Gender: F
Rank: Flight Officer
Bio: The mechanic, quartermaster, and janitor for the KSS Nimross. Cheerful, dense, and incredibly forgetful, Kylie tries to see the brighter side of things. This is a good thing since she has developed a reputation as the Terrible Lady Luck. Whatever she tries often ends up in chaos and destruction. Kylie keeps telling herself that tomorrow will finally bring her good luck.

Quotes:
“Yep, if there is anything wrong with the ship, I get to take care of it.”
“W-w-w-where did I leave my hat?” Name: Alphonse Tenzin
Age: 29
Gender: M
Rank: Major
Bio: The co-pilot of the KSS Nimross and a former fighter pilot. Laid-back and calm, Alphonse tries to not let himself get tied up over the things he cannot control. Spiritual and patriotic, Al believes in the cause he fights for and that the powers of the universe will guide him through safely. This puts him at odds with his wingman, Sol, leading to quibbling between the two. Name: Kika Starr
Age: 23
Gender: F
Rank: Lieutenant
Bio: The navigator for the KSS Nimross. The daughter of a famous politician, Kika has always had whatever she wanted. When she lost her family in a terrorist attack, her only servant sent off to the far side of the universe, and her only friends gone, Kika found herself alone in a universe that didn’t respect her anymore. Determined to make the universe back the way it once was, Kika fights with everything she has to reclaim her glory.

Quotes:
“Of course, that’s how it is supposed to happen!”
“I don’t miss Blade! I’m doing just fine on my own!” Name: Faye Moonfallow
Age: 23
Gender: F
Rank: Brevet Captain
Bio: The science officer for the KSS Nimross. After graduation from the academy, Faye received a posting on a remote planet studying wildlife. Back in her native habitat, Faye fell back into a routine where she slept all day and spent more time reading than studying the environment. While she is eager to meet up with her old friends, she wonders if she can adapt to being crammed into a tiny ship with people she barely knows. Faye is an incredible pushover and gets manipulated by those around her easily.

Quotes:
“I miss the birds. They’d always sing me awake.”
“You never know how much you miss friends until you see them years later.” Name: Stan Nelson
Age: 28
Gender: M
Rank: Colonel
Bio: A doctor on the KSS Nimross. Smart and crafty, Stan is an incredible actor and electrical genius. A ladies man, Stan uses his seductive power to get whatever he needs out of those around him. Stan is incredibly lazy and uncaring; he doesn’t work for the Katajion Directorship because of patriotism, but because they are willing to pay for the nicer things in life.

Quote:
“My dear, why don’t I show you my special injection?”
“Didn’t you see my posted hours? Are you lacking the capacity to understand what they mean?”

Emmett Cooke (Ned of the Hill)

Lights Out Dancing (Broken Compass; aka the opening song)

And a special thanks to jgHibiki for the logo.

One thought on “Rising Angels: Reborn”