Plot: Rising Angels is the story of Faye Moonfallow, her squad of somewhat loveable misfits, and their dreams of becoming officers in the Katajion Defense Force. However, before they can get there, they have to first pass the rigorous Space Sector Academy. Life is rough, non-stop, and the danger of getting the boot is ever-present. Can Faye and her squad overcome the challenges posed to them? Will the group destroy itself in chaos?

Right now, our status is…

RELEASED! Well, the first half is released anyway!

Bio: The daughter of a xenobotanist, Faye spent most of her life on the move with her father during his studies. Faye had few friends her age, spending her time with her father’s colleagues and going to school over the KataNet. This made the intelligent, analytical girl even more quiet and reserved, but unafraid to say her mind when the situation calls for it. While she wanted to continue traversing the universe with her beloved father, a military recruiter convinced her that joining the Space Sector as a xenobotanist with the fleet was a great way she could both earn a living and make a name for herself. 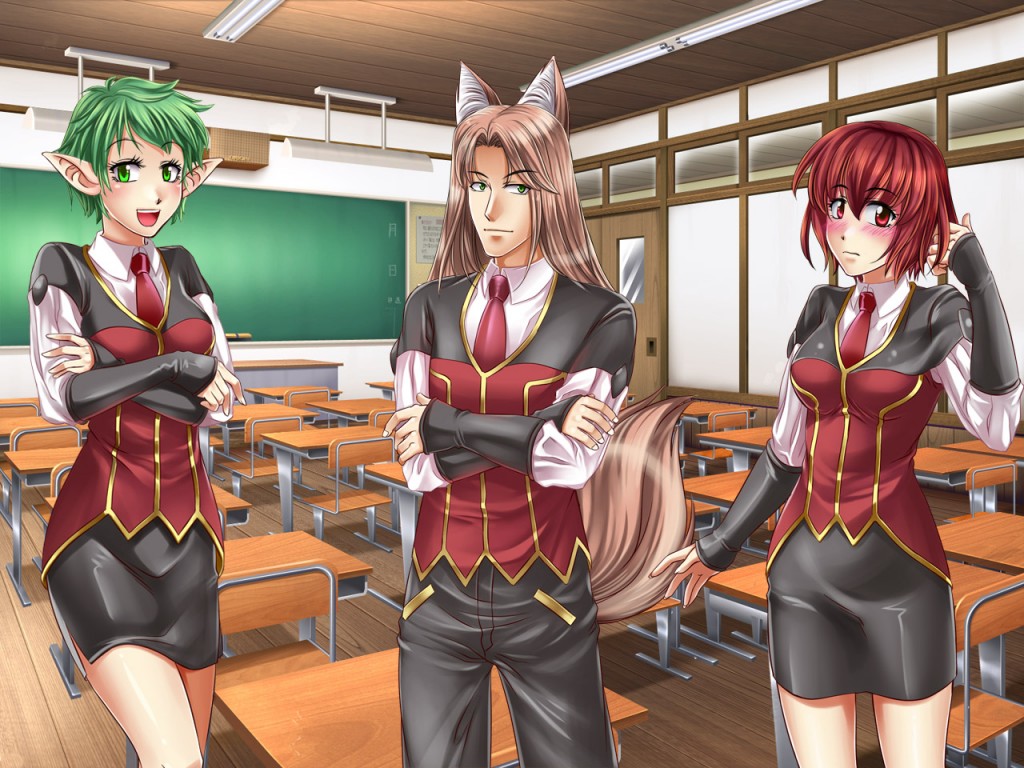 Bio: The daughter of a Katajion Director and granddaughter of the Trilani Rangers’ patriarch, many thought that she would have a life of ease. However, her father was assassinated in office while she was only three. She was then sent to live with her mother as an elven ranger trainee. Many in the community resented Minako Mono’s husband, leading to her exile from the world of Troplain. The council also wished to banish the young Yoi, but the Patriarch refused, saying she had commit no offense and would permit the girl to continue training as a ranger and the eventual heiress of the Trilani Rangers.

Yoi grew up with very few friends, suffering the scorn of being a half-elf in a pure blood society. Nonetheless, she tried her best to make friends, often coming off as hyperactive and talkative to conceal her loneliness. In an effort to help his granddaughter out and get her away from the racism, a deal was brokered between the Katajion Directorship to permit Yoi to attend the Space Academy, making her the first Trilani ranger to also attempt to be a combat pilot.

Bio:Self-confident, cocky, and the only prior Katajion Defense Force member, Iotor was selected to become a pilot after he transferred over from his previous job as a Space Assault Controller, the Space Sector special forces. While somewhat rowdy and unorthodox, when it comes to his job Iotor is nothing but dedicated and disciplined. Unlike his younger fellows, Iotor was married, now divorced, and has a two year old young son, Lio, who he almost never sees due to the constant danger and deploying. This is the only chance he saw of being able to both provide a good life for his son, serve his nation, and still be alive to see Lio’s third birthday.

Bio: A young woman from Chicago, Lenna lost her family early in her life to the war between the Raltin Empire and the Katajion Directorship. With no other family other than her close friends, Lenna was forced to scrape up a living on the streets. While something of a ditz, her determination and desire to survive drove her on, keeping her alive throughout the occupation of Earth and resulting destruction of Chicago. After coming of age and cramming knowledge for the academy entrance exam every free moment she could, Lenna was finally accepted to the Space Academy as a pilot. While fearful that she will fail with her low grades and a tad paranoid of her comrades, she refuses to accept failure and keeps pressing herself to become the best and pass. She prides herself on being up-to-date on the current fashions. 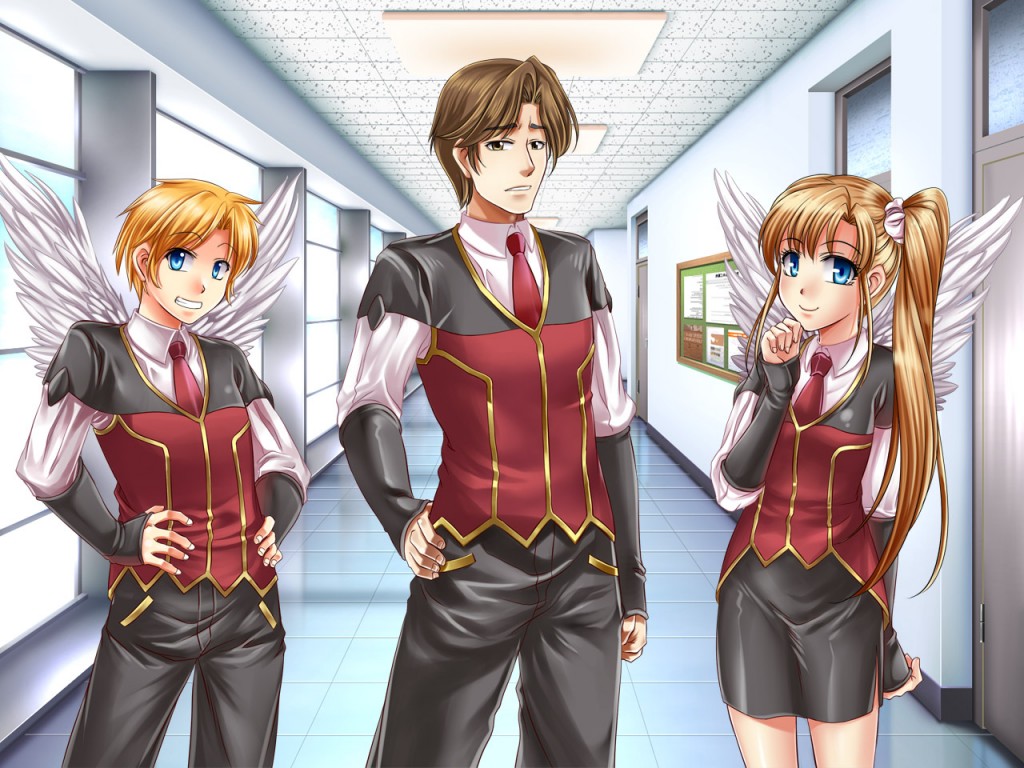 Bio: A rebel without a cause and a police record to follow. After a series of crimes that ended with a hijacking of a fighter and leading authorities on a two hour chase, Jade was sent to prison for forty years. However, a deal was brokered between the Space Sector and Judicial Sector to pardon the crime should he serve twenty years as a fighter pilot under their watch. Jade agreed. The young frikon was willing to serve with the force, but always was trying to toe the line to see just how much he could get away with in his pursuit of fast rides and easy lives.

Bio: Unlike most of his colleagues,Sol had never lost a family member to the war. In fact, his life was unaffected on the whole by the entire galactic conflict. His father was a transport pilot and his mother was a stayhome mom. The young man grew up with a strong belief in obeying the rules and leading a calm, orderly life.

Bio: Unlike the older brother who she adores, Mana isn’t a felon, simply a frequent delinquent. Mana is mischievous and loves playing pranks on everyone, so long as nobody gets hurt. She often joined up with her brother on some of his high speed hijinks, often putting him to shame with her superior flying skills. While she’d never admit it, she is the better pilot and mechanic of the pair, while he is the brains behind the operations. When he was offered the deal with the Space Sector, he demanded that one of the stipulations be that Mana got to come with, knowing full well that she’d follow him anyway. Something of a yandere when it comes to her older brother.

Name: Alana Faul
Age: 18
Gender: Female
Species: Afrik
Homeworld: Earth
Bio: Nicknamed the world’s biggest bookworm, Alana spend almost her entire life between the pages of whatever reading material she could get her hands on. Shy and timid, Alana made few friends growing up, preferring to stick with books that couldn’t judge her. During her final years in school, a military recruiter noticed her during a science fair where she had entered a miniaturized signal amplifier drone. After several tense sessions, Alana decided that she wanted to try and change her shy habits by forcing herself into an environment where she can’t shirk away. Nevertheless, her confidence that such a change is possible is non-existent.

Name: Kika Starr
Age: 20
Gender: Female
Species: Kitsune
Homeworld: Duster Station
Bio: The daughter of the leader of Duster Station, an independent trade station. Used to having the best that money can provide and the success that tends to accompany it, Kika grew up incredibly spoiled. Loud, brash, and determined, Kika’s princess mentality tends to rub everyone around her the wrong way. Most people tend to bear with it, as her father’s money overrides their dislike, leading her to further believe that not only is she the best at anything she does, but that she is also the most loved girl in the universe. When she finds out that her father cannot buy her a fleet of her own, she decides to join the Katajion Space forces to become the greatest admiral of all time.

Name: Termin Kaolin
Age: 17
Gender: Female
Species: Minotaur
Homeworld: Celestia
Bio: Termin grew up in a human-dominated community, often facing ridicule and hatred from the insular community. While she tried to make friends with the few humans who didn’t seem to mind her, the others would often drive a rift between them. At home, she lived with a family whom she rarely saw due to her parents always traveling and leaving her behind. With no companionship, she withdrew from society, deciding to be an observer of the events around her. Termin rarely will attempt to join in and help, preferring to further perfect her growing journal on the mentalities of various species. Deciding that she was never going to be a famous researcher without leaving her homeworld, Termin signed up to serve as a doctor, a position that would let her study many people from many planets.

Name: Blade Zenma
Age: 19
Gender: Male
Species: Afrik
Homeworld: None
Bio: The son of a decorated admiral, Blade believed that it was his duty to follow in his mother’s footsteps and pursued a commission as a pilot. In his mind, there is nothing more noble and honorable than being a hero pursing and destroying all of those who would threaten the peace and stability of the universe. Always reading and watching the latest heroic holovids and tales, Blade devotes himself to the “study” of the way of the warrior. However, his skills often do not live up to the fierce fire that lives in his heart.

[Instructors to be pictured later]

Bio: The cadets’ instructor. Maj. Brumford was a former Raltin fighter pilot who defected to the Katajion Directorship after running afoul with senior Raltin leadership. Fearing for his life, he took his craft out on a patrol mission and never came back home. He quickly rose through the Katajion ranks thanks to his fearless piloting and cutthroat dedication. Teaching cadet classes is nothing more to him than the next step in his career, swapping between being a hardline instructor to a laidback, uncaring guy depending on who is watching.

Bio: A young flight officer serving as one of the academy’s quartermasters. Unfortunately, being a lowly flight officer, Gayl ends up with all of the poor assignments and duties from the instructors and almost no respect from the cadets. He goes out of his way to assert his domination and authority over the cadets, often to no avail.

Bio: A Trilani mercenary on contract to the Special Forces Sector, who in turned lent her to the academy. Unlike her fellow instructor, Maj. Beryal believes that all cadets should be treated fairly and with respect at all times. Many of the other instructors call her soft, including her rival, Maj. Brumford, but she is unyielding in her views.

Bio: The current headmaster and lead instructor of the academy. While more than a little flighty and scatterbrained, Commander of the Wings Tyclue is respected fleet-wide for her battlefield tactics, gentle personality, and extraordinary perception. One of the many heroes of the defense of Earth, Nyana has quickly risen the ranks, only outshone by Commander Komi Y. Tsuku. Rumor has it that she only cares about getting her next promotion, which is why she has no problem drilling her troops from dusk til dawn to make them the best they can be.

One thought on “Rising Angels: The Red Rose”