As we move forward with Whispered Voyages, I’ve been thinking a lot about how certain characters were portrayed in Anton’s Vacation. Over the next couple weeks to release, I want to take a little bit of time and talk about the ones who are facing both major sprite changes or major character changes. Sometimes a little bit of both, as with today’s character.

Today’s character is Sylvania Logivechk, one of the longest standing characters in the series. As I’ve talked about before, Syl is very strange in that her core personality has never really faltered or changed. However, Anton’s Vacation was a bad moment when her outer shell was shown a lot more than the reason she is by far my most favorite female character from the series. Let’s go into some depth on that. 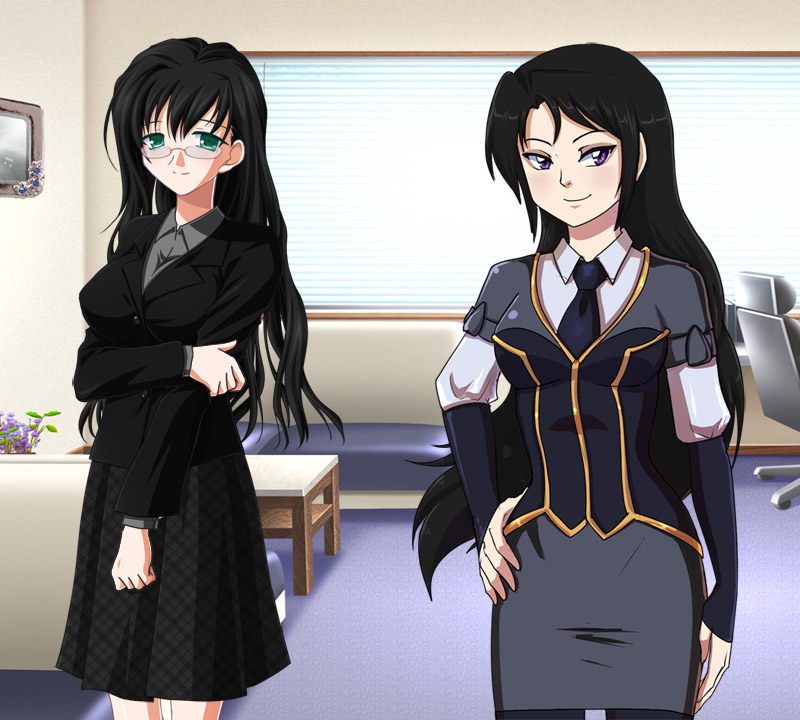 First thing that should jump out at you is the radical differences in the sprite itself. AV was so far off canon when it came to that we might as well have been talking about Lord of the Rings. Syl wore glasses, a schoolgirl uniform, green eyes, very big breasts, very wispy hair, and a stance that was very out of place for her. The sprite was just utterly wrong for Syl, but we used it because that was what we had at the time. Out of all of the characters, Syl’s sprite underwent the most changes. Changes that made her both canon and fell better within how she composes herself.

If there is one thing I loath from AV, it is how Syl was portrayed. To me, Syl is the model. She’s determined, ingenuous in matters both physical and emotional, and a team player. She can be forceful when the situation calls for it; I always picture her walking along side Anton, stepping in front when danger lurks or falling back when they enter the political arena. Falling back, but always there to step in. Almost always, Syl will hold back and gather the facts, using moderation when unexpected situations arise.

What she isn’t is a clingy servant of Anton. The thing that seemed to be missing from Anton’s Vacation is the badarseness that makes Syl herself. There was the closeness with Anton that came from three years of living alongside him night and day, but it didn’t have the feel that I wanted. They weren’t two close friends who had been through hell together, it was a shy girl who couldn’t express her feelings. Good story, I often enjoy it, not Syl’s story. While that is a facet of their relationship in the story, I focused a little too closely on it. What I want to do is show the relationship before I try forcing the changes down the reader’s throat.

Well, that’s it. Major sprite changes and more badarseness for Syl. Stay tuned for our next entry on either Ai Onday or Sora Doichu.

And for the video of the post, let’s pay tribute to a legend almost as big as Anton.

It has been a long, long day of misery and woe for me, but at least there is one bright spot in the day! Time to announce our winners for the contest. The reviews will be a little late coming due to my being at home for less than two hours a day, but we can announce the winners now at least!

Before I get into this, I want to thank everyone who participated. This project meant a lot to me. Dreams of the Skies holds a very dear place in my heart. To have people participate in this contest is something that I can’t express into words. All I can say is thank you so much and I hope you continue to support our work as we move forward.

Art Contest:
A common thing I noticed in this category was a lack of theme. In the end, theme was the determining factor between first and second. Third and fourth was also an incredibly close race. I mean it was decided by a hair. Hours were consumed debating 3rd, whose art was clearer and had a slightly more artistic impact, and 4th, who was the only person to nail the theme perfectly. Honestly, if I could have split 3rd and 4th, I would have. The final decision came down to my assistant. When we release the review this weekend, we will get into the exact debate that went on.

Writing contest:
Writing was very easy to determine first. While I absolutely adored every entry in here, 1st was grammatically sound and had wonderful emotional impact. The theme was easy to see as well. 2nd and 3rd had a close contest similar to the art’s. Emotional impact was what tipped the scales here. I personally loved Hope, hell I was very interested in reading what would be an interesting series, but Happy had that emotional factor that swayed the other judges.

To those who won, you should be receiving messages from me shortly. The review will be posted up sometime this weekend; I’ll post it here as well as on my site. For those of you who are interested, there will also be a talk about the revival and merger of Echo Disks, Anton’s Vacation, and Anima.